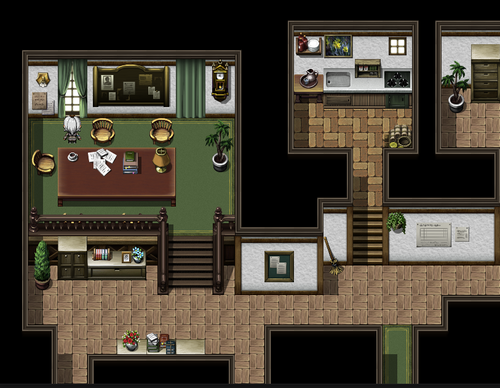 if you're reading this, you've probably seen the main page of the game, already. Since I only recently migrated Trachi to this site, I want to use this post here to outline the state, roadmap and future plans I have for this project.

This will be a longer post, but I will try to structure it in such a way that you will be able to gather the information relevant to you without reading through the entire thing.

That being said, I've covered the history of this project in a separate post, so if you're interested in that, feel free to have a look at that.

In any case, let's try and summarise where we're at.

Current state of the project

Now, as you know, the revamped prologue has been released last Sunday, on June the 20th 2021. Although I don't consider it the definite version, it is going to be very close to it. In concrete terms, I've set it upon myself to consider everything the events of the prologue canon and not change any any narrative elements any more, provided they themselves don't contain any consistency errors or the like.

As of now, I'm focussing all of my efforts into the main game, which will encompass the three acts covering the story of Trachi. Every act will encompass around a day of events, mainly set in Trachi.

However, as with the prologue, there will be a lot of intermissions covering both past and present events from another perspective.

There are a lot of different characters involved, who each have their own specific agenda. It is vital to me that all of these characters are interwoven into the story in such a way that they have an effect on it. Trachi is, after all, a game about imperfect information.

As such, I consider the discovery of knowledge about the intricacies of the world it is set in to be one of its primary distinguishing features. There will be a lot of references to both events and characters of the prologue, and I hope that my explanations of why a certain thing happened will be plausible, in your eyes, too.

For this matter, I am still working out the kinks in the first act, especially in regards to both concluding certain events of the prologue, while also foreshadowing the things that will happen in the days afterwards.

That being said, I expect the first act to be released during the course of July 2021.

As with the prologue, this will be a fully functional, albeit preliminary version. The main reason why it's not considered final is because I want to leave the opportunity open to slightly change certain aspects of it. However, I don't expect these changes to be as severe as they were with the prologue.

After the preliminary version of the first act is released, I will move on to refine act two and get it ready for a preliminary release as well. It's hard to gage how long it's going to take, but I would assume that it won't be longer than a month or two. Following this, the same procedure will be applied to Act 3, which is also already finished in it's rough form, as of now.

Once all the acts have been released, I will then go back and work on Trachi in it's entirety. The end goal is to have the prologue and the three acts in one package.

Due to this particular release schedule, I will also try and implement the ability for the player to choose a specific Act to start from. This way, you won't have to replay through older sections of the game and can jump right into where you left of, before.

Now that I'm finished with the raw structure of Trachi, it's become obvious to me that not all of the events can be concluded during its course. After all, it's a bit hard to tell the story of an entire world in four days. And besides, there's a lot of other places I want to show you, as well.

In fact, I am more and more warming up to the idea of Trachi itself being the first part in a trilogy. This is not set in stone as of now, however.

Furthermore, it is very important to me that Trachi can stand as a story by itself. I am thus taking great care that the by the end of the third act, the player will be adequately satisfied with the conclusion of a project that has accompanied me for more than ten years of my life.

Nevertheless, I have already conceptualised the sequel in part and will probably start to work on it once Trachi as a project has been properly wrapped up.

In other words, I'm here to stay.
For some time, at least.