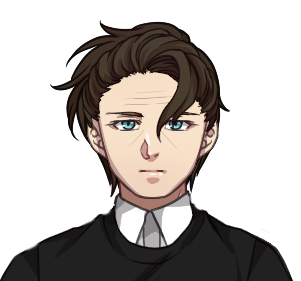 Born on the 15th November 1895 in Gerun District, Aionia.

Integrated into the Ionian Intelligence Service (IIS) in 1922.

Not much is known about Atlas' past pre-EnKaD. Supposedly, both of his parents were imprisoned and subsequently executed by Loyalist forces during the Revolutionary Wars.

Being left an Orphan, Atlas was raised by his aunt, until he disappeared in 1908.

By the time he resurfaced  in 1910, Atlas had become a high-ranking member of the Strelka Alley Syndicate.

Rumours say that he contributed to several heists, including the Alkin Central Station Train Robbery and the Grornu Riots in 1912.

Atlas was subsequently arrested by the People's Police and detained for questioning.

During that time, a senior officer from EnKaD happened to conduct an investigation of the local prefecture.

The officer, known as [REDACTED], demanded to question Atlas himself, employing the entire range of interrogation techniques at his disposal.

Atlas, however, refused to give up the names of his co-associates.

[REDACTED] was impressed with Atlas' fortitude, and recommended his immediate recruitment into EnKaD.

Since then, Atlas has become one of the most integral assets both of EnKaD and its successor, the IIS.

Atlas is, without a doubt, the best agent we have at our disposal for the present operation.

Not only is he one of our most reliable and experienced field agents, but he has also been to Trachi before.

Not only that, but Secretary Prawnfield has specifically recommended Atlas for this assignment.