I've spent the last one and a half weeks primarily on remaking all the existing characters in a new generator.

The face images for the three main characters are now finally implemented. The other characters in Act 1 have their base finished as well and just need their face varieties implemented.

Beyond that, there's only the walking sprites left to do. This shouldn't take too long however, and I still expect to meet the end of July deadline.

Now, as for the remake of the characters:

Much of the effort went into trying to keep the general features behind the characters intact. However, there are some cases where this either proved impossible, or the new remade characters are much closer to how I envisaged them in the first place.

The most prominent example is the case of Atlas.

Conceptually, he was always supposed to be in his late twenties. However, I was keen to distinguish him from Daphne and Ganymede in such a way that he would be the clear veteran of the group. This is why he looked much more rugged than originally planned. I tried to redo him several times, but the built-in generator didn't really allow me reach a satisfying result.

After playing around with the new generator by Stella, I've finally managed to achieve that. Atlas is now looking a lot cleaner and has lost the beard, at least for now. 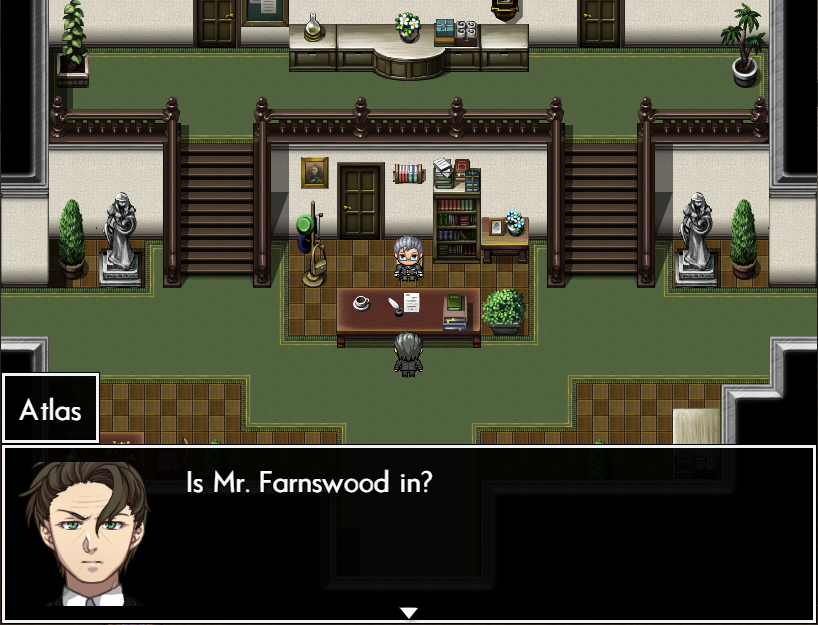 In future installments (aka the sequels), he will grow to resemble his old look a lot more. As for Trachi though, we'll get to see an Atlas that is well accomplished, but still well in his youth.

Anyways, below you'll find a screenshot showing off Atlas' new look. I hope those of you who've seen the old Atlas will be able to come to terms with this radical change.

Anyways, I'll be back soon with more information and material about act 1.

In the next devlog, I'll focus on some of the areas, and show off the other main characters, as well.

See you then, friends.